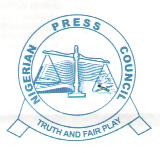 COMMUNIQUÉ ON THE TWO-DAY WORKSHOP ORGANISED BY THE NIGERIAN PRESS COUNCIL ON THE ROLE OF THE MEDIA IN VIOLENCE-FREE ELECTIONS HELD AT NIGERIA UNION OF JOURNALISTS PRESS CENTRE, YENAGOA, BAYELSA STATE FROM WEDNESDAY, 18 TO THURSDAY, 19  NOVEMBER 2015.

The Nigerian Press Council (NPC), in pursuance of its mandate to enhance professionalism in the media through capacity building programmes for journalists, organised a two-day workshop on The Role of the Media in Violence-Free Elections to promote the moral tone of the profession.

The workshop, held at the Nigeria Union of Journalists Press Centre at Yenagoa, Bayelsa State, from Wednesday, r 18 to Thursday, 19 November, was a prerogative of the NPC aimed at imparting positively on the forthcoming governorship election in the State by sensitizing journalists on their role in ensuring a violence free and credible election through ethical and responsible coverage.

It was declared open by the Hon. Commissioner for Information and Orientation, Bayelsa State, Barr. Esueme Dan-Kikile.

Issues germane to the  thrust of the objective of the forum were aptly captured in its sub-themes on papers presented and discussed on Ethical Journalism: Panacea for Violence-Free  and Credible Elections;  Elections Without Violence: The Route to Sustainable Democracy, The Role of the Media in Enhancing free, fair and Credible Elections and  Social Media and Elections.

The workshop was commended for its timely intervention, particularly as Bayelsa State election was perceived to be highly competitive. The Bayelsa State INEC Resident Electoral Commissioner, Mr. Baritor Kpagih and 65 other participants from the academia, the print and electronic media in the State were in attendance