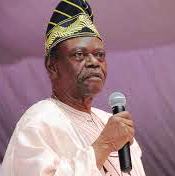 Alhaji Odunewu popularly known as Allah De died on Thursday, July 25, 2013 at the age of 85 at St. Nicholas Hospital, Lagos. Allah De was a former Editor of the Daily Times where his Allah De column was for many years the delight of readers. He was the Chairman of Nigerian Press Council (NPC), Chairman, and Board of Trustees (BOT) of the Nigeria Media Merit Award (NMMA). Alhaji Odunewu began his journalism career at the Daily Times as a reporter in 1950. He left Daily Times in 1956 as Sub-editor to become the Managing Editor of the African Press Limited, Ibadan, Publishers of the Nigerian Tribune between 1956- 1957. He spent four years, between 1960 and 1964 as the Editor-in-Chief of Allied Newspapers of Nigeria before he left to become the Editor, Sunday Times in 1964. He rose through the ranks at the Daily Times before he was appointed editor of the newspaper after Peter Enahoro. Alhaji Odunewu who was buried on Friday, July 26, 2013 according to Islamic rites was survived by three children.